Email yourself a copy of this

See all listings from Gloucester Guildhall

If you have reason to believe this advert is out of date, please click here to report it to Glos.info.

Stephen Kehinde Amos is a British stand-up comedian of Nigerian origin. A regular on the international comedy circuit, he is known for including his audience members during his shows. He began his career as a compere at the Big Fish comedy clubs in South London, and has been nominated for Chortle's Best Compere Award three times in 2004, 2007 and 2008. 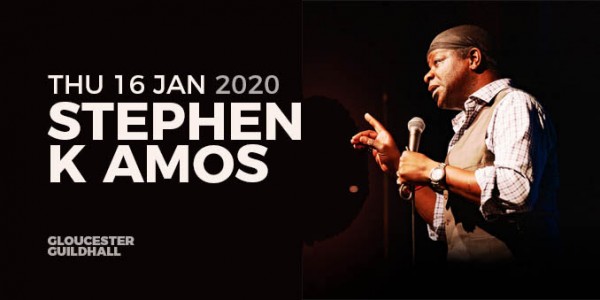 Not a man to needlessly set about causing divisions in his audience, the very funny Stephen K Amos has always been an everyman comedian. Fitting then, that his brand spanking new UK tour should be called Everyman. But in his typically open
and non-polemical style, he wants to you to do the thinking yourselves on the title.
“You can take it in a variety of ways: is it every man for himself, as it appears to be around the world at the moment? Or is it that we should reconsider the fact that the whole of humanity will only survive and progress if every man pulls together? It really does depend on your point of view. I’m not a preachy sort of comic, I prefer to leave things up in the air and for the audience to make their own decisions.”
On an annual basis, Stephen takes a sparkling new show out to the nation, and each time fresh social and political challenges are there to be faced. This time around, Everyman may well be performed in a country which is now no longer part of the EU.
“What I’m trying to be more prepared for is how the audience will react because I did a show on the night of the Brexit vote, and that was the weirdest crowd I’d had for many years: there was a huge division in the room and people were in shock. The only other gig I could equate that to was one in East Anglia where there was a funny mood in the audience, and after about seven minutes I just said ‘hey guys, there’s
about 800 of us in here: what’s happened?’ Someone shouted out ‘they’ve closed the car park and we had to walk for ten minutes!’ So they just sat there in a grumpy mood, and that was the exact same thing that happened on the night of Brexit.”
Stephen insists that he won’t cover Brexit if he finds he has nothing new to say about it, but he does have some broad areas he will definitely be confronting in Everyman.
“I’m tackling things as simple as how we face our own mortality as we get older, and looking at things you can do to improve yourself when you’re trying to find answers to questions.”

This desire for answers has been partly sparked by a TV show he appeared on earlier in 2019. BBC’s Pilgrimage featured a number of celebrities (including Dana, Lesley Joseph and Les Dennis) who embarked on a journey (both physical and
spiritual) to Rome. As an atheist and gay man, Stephen was initially taken aback when the group was offered a private audience with the Pope as part of their adventure.
“Never in my wildest dreams, at the dizziest heights of stand-up comedy when you’re meeting very famous people and on bills with Rihanna or Madonna, never did I think I’d be sitting down for a half-hour private audience with the Pope. Particularly for a man with no religious leanings; it was so surreal. I was very apprehensive because I said I would only be part of it if I could ask some questions; I didn’t want to be sitting there being talked at and not have the opportunity to address issues. I had a weight on my shoulders that if I didn’t do this, that I would be doing a disservice to a whole community of people. They did say it might spark an international incident depending on the question, but I said bring it on.”

The pontiff’s response to Stephen’s question about not feeling accepted as a gay man by religion and religious groups surprised him by being so open and generous.
“I said to a friend there beforehand that I was 100% prepared to walk out, not flounce which may have been great for TV, but just get up and leave if he had given me a stock response. But I was blindsided by how candid he was. He wasn’t that explicit in
what he said but it was enough to make me realise that, you know what, you’re one of the good ‘uns.”

His experience during Pilgrimage left him altered and has bolstered one of the longstanding ideas he’s had for his own comedy. “I’ve always wanted to have people in the audience who don’t share the same views as me whether politically, socio-
economically, and racially, and to see if we can have a common ground for laughing together. I don’t want to be that kind of comic who gets a big round of applause and everyone goes ‘yeah, I agree!’. I want you to laugh and to be blindsided in the way
that the Pope blindsided me. I want you to be surprised, not to feel like you’re at a rally with like-minded people.”

Stephen is happy to be back on the road and delighted with the show he has put together. “The structure is in place, and I’m very fond and pleased with it. I think there’s a maturity to the show; I’ve got peace with myself in terms of not having to
show off. It’s a departure for me.” But one thing that won’t be different is Stephen K Amos’ ability to make audiences laugh, wherever they are around the country. Especially if the venue car park is fully operational.

See all listings from Gloucester Guildhall

Disclaimer
glos.info try to bring you details of the best local events. Amendments to the published details can occur, so please check with the venue if uncertain.